Accounts of medical professionals performing triage due to the over-burden of healthcare systems during the COVID-19 pandemic are hard to hear. They are a microcosm of dynamics that are occurring globally, where public health authorities and governments are attempting to simultaneously understand and respond to a swiftly moving global pandemic. In this article, the European Centre for Disease Prevention and Control Public Health Emergency team* offer lessons from recent history for decision making during this difficult time.

The direct and indirect impacts of COVID-19 to both public health and economies are substantial. Many of the choices that countries are currently making surrounding public health control measures will involve important social and economic considerations (Anderson RM et al., 2020;395(10228):931-4.1). Prior to the emergence of COVID-19, the European Centre for Disease Prevention and Control assessed the relationship between scientific evidence and decision-making from past infectious disease outbreaks (ECDC, 2019), (Salajan A et al., 2020) Although the incidents we reviewed were not nearly as disruptive as COVID-19, they do offer lessons about the management of decision-making that are relevant to the current situation. These are outlined as follows.

Scientific uncertainty and the urgency of decision-making are two characteristics that all infectious disease outbreaks share. These are unhappy bedfellows, particularly when decisions cannot be delayed. One insight from studies of the 2009 A(H1N1)pdm09 pandemic is that those accustomed to the tenants of evidence-based medicine may find decision-making to be more challenging than those more accustomed to contextual decision-making (Rosella LC et al., 2013;83:1-9).

One way of coping with uncertainty is to follow existing pandemic preparedness plans or, more broadly, the precautionary principle, but the implementation of even these approaches tends to be affected by recent history. In some settings, it has been suggested that lessons learned from recent experiences with highly challenging outbreaks of SARS or MERS may have paid early dividends (Normile D, 2020)(Webster P, 2020;395(10228):936-7). In some other settings, in the wake of A(H1N1)pdm09, we identified instances where countries and agencies received criticism for having been perceived to have acted more stringently than they needed to (Salajan A et al., 2020). Prior to COVID-19, it had been hypothesised that in the next major outbreak, these countries might be somewhat wary of acting aggressively. Nonetheless, we would suggest that the downside to the opposite direction – i.e. potential future critiques of insufficient or late action during the COVID-19 pandemic – should be of far greater concern to decision-makers.

All public health agencies and governments can take steps to account for and communicate uncertainty during the COVID-19 pandemic. For example, one option is to monitor and communicate the ’known known‘ and ’known unknown‘ aspects of parameters relevant to decision-making, and to publish these alongside risk assessments or policy decisions (Versluis E et al., 2019;5(1):80-98). This would not only enhance the transparency of risk communication but, crucially, it may also later help decision-makers explain to their citizens the reasons behind the introduction, tightening, or loosening of specific measures as new evidence becomes available. In addition, pointing to key knowledge gaps (such as about the proportion and role of asymptomatic and presymptomatic transmission, the period of infectiousness, the role of different transmission routes, post-infection immunity, or the necessary duration of social distancing measures) that are important to decision-making may help to orientate current research. This, in turn, could help to reduce uncertainties surrounding various response options.

Accounting for a broad range of evidence

As response measures related to COVID-19 have major socio-economic implications, it is essential that public health agencies and governments are explicit about the sources of evidence that have underpinned decision-making. An important critique of the governance response to pandemic influenza that appears to remain relevant today is that biomedical knowledge and practice have dominated discussions at the expense of other relevant disciplines (Kamradt-Scott A, 2012;7(sup2):S111-S26.8) and even public debate (Baekkeskov et al., 2017; 24(7): 1006-1026). Although it is obvious that response measures must be based upon the latest epidemiologic data, governments will need to assess trade-offs between health outcomes, economic outcomes, and societal disruption. National governments should be transparent about the complexity of decision-making and clarify when and how non-biomedical factors (such as economic, ethical or political) have been considered. It is important for the perceived credibility of public health science that these factors do not become conflated. Where the public is left to speculate about where, for a given decision, the epidemiology ends and other socio-economic considerations begin, transparency is diminished and trust in decision-making is eroded.

A striking feature of the global response to COVID-19 thus far has been diverging response measures across countries, despite equal access to evidence provided by agencies such as WHO and ECDC. This phenomenon was also apparent during A(H1N1)pdm09, where officials from different countries were found to have reached varying conclusions about the pandemic despite having access to the same information (Keller AC et al., 2012;3(2):1-37). The explanation for this can most likely be found in varying epidemiologic, political and governance contexts underlying national response planning, while it has been furthermore suggested that ‘reputation-seeking‘ by technical agencies can also affect decision-making (Baekkeskov E, 2014;49(2):163-89). Moving forward, it will be necessary for national governments to intensify collaboration with each other, not only for the production and distribution of diagnostics, vaccines, medicines and personal protective equipment, but also to exchange epidemiologic information, clinical best practices, and to coordinate the lifting of COVID-19 containment measures (European Commission). In some instances, countries may also find it to be beneficial to pool critical resources, such as hospital beds, with neighbouring countries.

Although decision-makers are already stretched to the limit, it will be important to attempt to optimise decision-making throughout the various phases of the response to COVID-19. Incorporating processes for reviewing and amending crisis governance structures, decision-making processes, and the breadth of composition of decision-making teams is a priority. In the aftermath of COVID-19, comprehensive after-action reviews (ECDC, 2018) will need to be conducted so that paths for improvement can be identified and followed. It is imperative to ensure that the world will be better prepared for the next pandemic.

This post was originally published by Transforming Society on 24 April 2020.

The organisation of local mental health services in Norway: evidence, uncertainty and policy 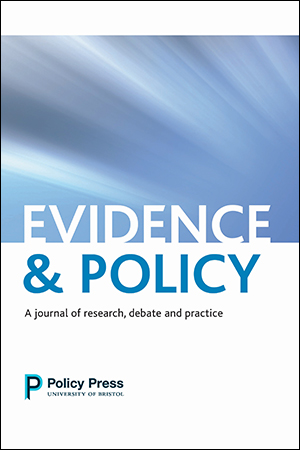 Published by Policy Press, Evidence & Policy is the first peer-reviewed journal dedicated to comprehensive and critical assessment of the relationship between researchers and the evidence they produce and the concerns of policy makers and practitioners.

Republish our articles for free, online or in print.